Michael van Gerwen added another major PDC title to his overflowing CV by beating Dave Chisnall 5-2 to retain the World Grand Prix title on the outskirts of Dublin. 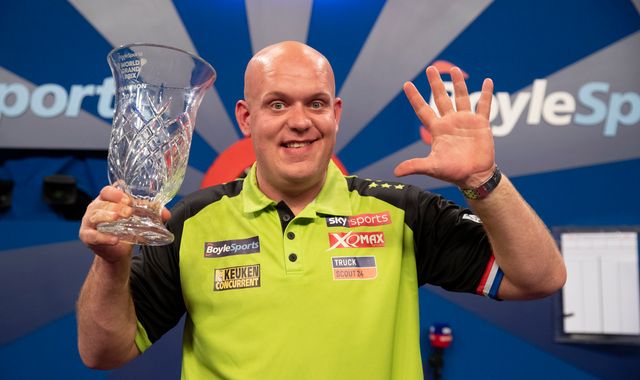 In a high-quality contest that saw both men average more than 90 and five of the seven sets go the distance, Van Gerwen produced at the pivotal moments to retain the title he won last year by the same scoreline.

Chisnall fired in 12 180s but remarkably it was not enough as MVG claimed the third, fourth and all-important seventh sets in a deciding fifth leg, cranking up the pressure on Chizzy with a brutal display of cover shooting on treble 19 and three 100+ finishes to extend his winning run in the tournament to 10 matches.

Chisnall suffered a fifth successive defeat in major finals, a third at the hands of Van Gerwen but it’s now five Grand Prix crowns for the brilliant Dutchman, who has also won the World Championship, the Masters and the Premier League this year and has fired an ominous warning ahead of the busiest time of the darting year.

Chisnall, who managed just two legs in his 6-0 defeat to Phil Taylor, got on the board by claiming the first leg of the second set, matched his 2013 tally by taking the third and then levelled the contest with a classy 101 finish.

Then a break of throw for Chizzy in the opening leg of the third gave him the lead for the first time, although the third set proved all-important.

Chizzy twice broke to lead, only to see Van Gerwen break back both times and then seal the set with his first three-figure shot – a composed 111 finished on double top had the world No 1 back in front.

Van Gerwen rammed home his advantage with an early break and then a brutal 114 finish early in the fourth, but Chisnall stopped the rot by going seven darts of the way towards a magical nine-darter.

He claimed the leg with a sublime 11-darter and then forced another decider by pinning double 18 after Van Gerwen’s missed opportunity.

Nevertheless, the Dutchman showed all his class to produce a brilliant 13-dart leg and claim a two-set advantage for the first time.

He made it three by continuing to up the ante, his match average moving beyond 95 to stand on the brink of another title.

Chisnall needed something special to extend the game and he produced it, averaging 104 and taking his maximum haul into double figures to take the sixth set.

A perfectly pitched 15-dart leg saw Chizzy reduce the deficit but it merely delayed the inevitable.

Another high-quality set went Van Gerwen’s way as he sealed the title, a third 100+ finish looked to have broken the spirit of Chisnall but the man from St Helen’s fittingly forced a decider yet again, where Van Gerwen found double six to claim a fifth Dublin crown, six short of Taylor’s record.

Darts is back on your Sky Sports screens next month with the Grand Slam of Darts, nine days of coverage from the Aldersley Leisure Village gets underway on Saturday, November 9.