Vincent Kompany’s night to remember at the Etihad

It was a night to remember for Vincent Kompany at the Etihad as his testimonial featuring the Man City Legends and the Premier League All-Stars ended in a thrilling 2-2 draw. 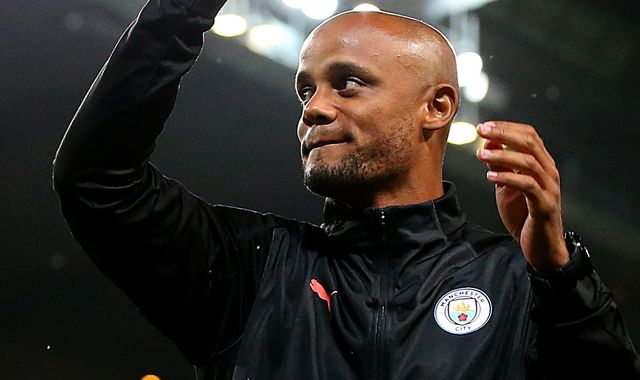 Kompany himself had been ruled out of the clash with a hamstring problem, joking ahead of kick-off that in many ways it was fitting for him to sit the game out with injury.

However, there was still plenty for the hugely popular Belgian – who left City at the end of last season after 11 trophy-laden years at the club – to enjoy in front of 51,602 adoring fans.

However, with the Premier League champions at Norwich City on Saturday night – a match you can see live on Sky Sports Premier League – the Man City Legends’ manager Pep Guardiola took less than half an hour to haul off both David Silva and Sergio Aguero.

BALO IN THE HOUSE

Former Man City forward Mario Balotelli was in attendance at the Etihad, although the Italian was not in action on the pitch.

And maybe that is because there were some suggestions that Balo – who played for City between 2010 and 2013 – had not actually told his employers, Brescia, about his whereabouts, with the player due back at training first thing on Thursday morning!

NEV OR CARRA: WHO WAS TO BLAME?

The Man City Legends made a dream start to proceedings by scoring virtually straight from the kick-off as the pace of Martin Petrov down the left saw Gary Neville left for dead, before the former City winger fired home into the roof of the net.

And that first-minute strike also resulted in a heated debate between Neville and his fellow defender Jamie Carragher as to which of the veteran Sky Sports commentators was to blame for the goal – watch the above video to make up your own mind!

SCHOLES ROLLS BACK THE YEARS

Former Man United and England midfielder Paul Scholes played the entire match for the Premier League All-Stars, six years after hanging up his boots at Old Trafford – not that you would have known from the 44-year-old’s imperious display.

And the highlight of his performance was this impudent, no-look flick in the second half…

There was a lovely moment at the start of the second half when Francois Kompany, Vincent’s younger brother, was brought on.

The 29-year-old currently plays as a left-back for Belgian First Division B side Roeselare, with Vincent saying his only regret of the night was not being able to play alongside Francois in the same team.

NEVILLE: I’VE NEVER PULLED A HAMSTRING IN MY LIFE!!

Sadly for Neville, his match lasted only 35 minutes before the right-back had to be substituted with a pulled hamstring, sustained running after Craig Bellamy.

When quizzed on the injury by Geoff Shreeves, the 44-year-old claimed that it was the first time he had ever suffered such an injury!

After the game, Robin van Persie and Carragher were both in agreement as to just who was to blame for the Man City Legends’ quickfire opener…

A FINAL SAY FROM VINNY

And it was left to the man himself to have the final word on an emotional night for the Belgian, as he thanked the fans for recognising his achievements, as well as helping to raise vital funds for his charity, with all the proceeds from the game being donated to Tackle4MCR, dedicated to combating homelessness in Manchester.