Current Glasgow Warriors head coach and incoming Australia head coach Dave Rennie has spoken exclusively to Sky Sports Rugby about his decision to take the Wallabies job, how close he was to coaching the All Blacks and the challenges that await… 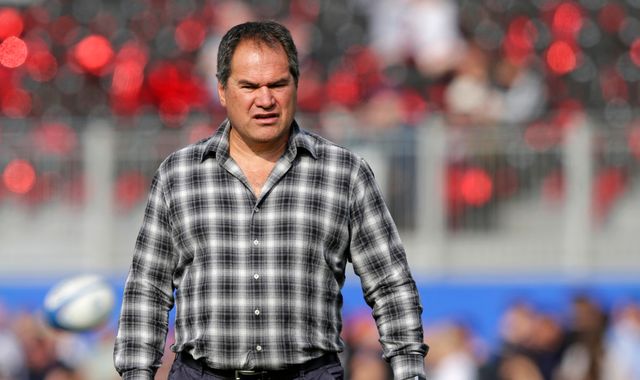 The Wallabies are coming off the back of their worst Rugby World Cup performance for 12 years. Under Michael Cheika, the side’s form seemed to steadily decline year on year.

Stalwarts of the nation such as David Pocock and Will Genia have retired. Off-field issues have dominated Australian news almost as much as the rugby.

Yet, New Zealander Rennie has decided to make his first leap into the international coaching arena with the Wallabies. Why Australia and why now?

“We’ve been trying to decide our future over the last 12 months or so,” Rennie exclusively told Sky’s Rupert Cox on the Will Greenwood Podcast.

“We made a commitment to stay here [in Glasgow] for a third year, which has been really good, and looking beyond that, there were a couple of international options.

“We did our homework and it [the Wallabies job] is exciting. There’s obviously things under Michael Cheika that were done well, and we can build on that. There’s a real appetite for change and there’s a lot of good people who are prepared to roll up their sleeves and get a bit of work done, so it really appealed.

“It’s an international role which I’ve been interested in for a while, and coming up here [to Europe] has been good for me – it’s a slightly different game and I’ve learnt plenty.”

All Blacks in touch…?

Having coached Wellington, New Zealand U20s and the Chiefs before taking charge of the Glasgow Warriors in 2017, Rennie had also been in the conversation to succeed Steve Hansen as the next All Blacks coach.

Indeed, his name had been bandied around and he confirmed talks did take place. So how far along the line did he get to signing on with his native union?

“Obviously they made contact, as they did with a lot of people, and I fielded a couple of phone calls to raise my own interest.

“But, in the end, I’d been speaking to Australia for a number of months, and they were pretty positive around those meetings.

“I’d spoken to board members, to Raelene (Castle, Rugby Australia CEO) and to Scott Johnson (RA Director of Rugby). We’d discussed it, looked at it in detail, and so when they made the offer, it was a pretty simple decision.

“We were just a long way down the track prior to the All Blacks showing any interest. It was a simple decision.”

In addition to on-field performances not being where they need to be, there are further issues associated with being head coach of Australia too.

The Wallabies experience a player drain like nowhere else in the world game, bar South Africa, while the sport is also far from high in terms of popularity and playing numbers within the country.

“I’ve spoken in detail about those things to Scott Johnson and, to be honest, the fact he’s there helped in my decision-making.

“They are making a real effort to contract young international players and there’s a lot of them coming through on four-year deals.

“There is no doubt that over the last few years, there’s been a lot of Australian players heading to Japan and heading to this part of the world, and I guess you’ve got make sure that there’s an avenue and a pathway for those players and show them a bit of love and interest.

“There’s also a lot of competition within the country: rugby is the fourth-ranked male sport there. But, ultimately, I’ve been really impressed with Raelene, I know Jonno well, and there’s already some rocks in place to stem the flow and identify good young kids to try and get them to stick to our code.

“The danger of selecting players from overseas is that the amount of money on offer in Japan and Europe is massive, and you’ve got minimal control over what happens from there.

“If there’s a prop who is playing in France, they don’t care if he can catch a pass or move, it’s more about whether he can scrummage and that makes it pretty difficult to select him and bring him back in for a Test series where he’s going to be playing against some of the best players and well-conditioned athletes in the world.

“And I think the ideal scenario is you have your best players playing with the young players who are coming through, so there’s role-modelling happening and so on.

“But it’s a real challenge and there’s a real danger in opening it up and the affect it would have on the game in that country.”

One buzzword Rennie has used throughout his coaching career is culture. And he sees the Australia job as no different.

For the players and team to ultimately succeed, they need to get the general public onside.

“You’ve got to get a connection with the people and with the game and the history,” he said. “Because we are playing for something bigger than ourselves, and the only way you recognise that is if you get a hands-on, genuine connection with it.

“I think it’s really important and, looking further afield, it’s a way of growing the group and becoming stronger as a unit. We have got such a multi-cultural group of people there, that you want to be able to tap into different cultures and bring everyone closer together.

“I’m going in with my eyes open. I was well aware that Australians want an Australian coaching their national rugby team. That makes sense.

“Obviously that’s not the way it’s going to be. I was expecting to get a fair bit of flak from both sides of the Tasman, but there’s been an enormous amount of support as well.

“If we’re not winning, you come under scrutiny, and maybe more so being a foreign coach. But I’ve embraced the culture wherever I’ve gone and I want to make a difference in Australia.

“It’s not just a case of me thinking, ‘well, I’ve got a contract for three or four years and I’m not too concerned about grassroots rugby and so on’. I want to leave the place in a better place than I found it.

“I’m passionate about the game and creating change. You’ve got to surround yourself with good people to make change, and I’m looking forward to that challenge.

“It’s important that we have high expectations and that we get results from the start as opposed to talk about rebuilding, young teams and a World Cup in four years’ time.

“The rugby public won’t be too concerned that far ahead. They’ll want results or certainly a team that’s spilling a bit of blood for each other.”

(c) Sky Sports 2019: Dave Rennie on taking the Australia job, how close he was to the All Blacks and more