Whose ban cost Liverpool the title? Why was it Torres’ time to go? Jamie Carragher shares his memories of Liverpool’s games against Chelsea… 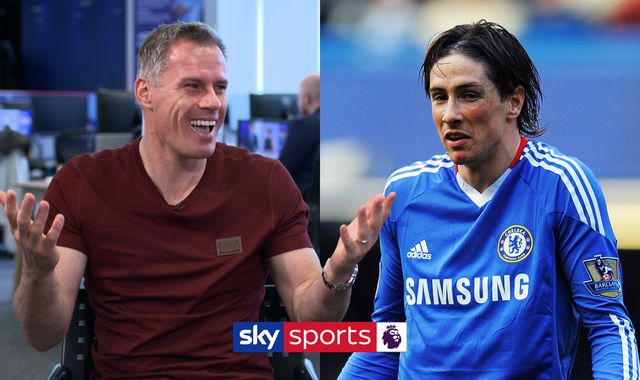 Carra played in many games between Liverpool and Chelsea – and more than his fair share of big ones, during the rivalry that emerged between the two clubs in the 2000s – so who better placed to look back on some of the classic encounters in the Premier League era between the two ahead of this Sunday’s match at Stamford Bridge?

The ex-Reds captain relives his first game against the Blues, the match which may have convinced Roman Abramovich to take over at Stamford Bridge, the ‘ghost goal’ and much more – and he has some interesting views on Fernando Torres and Luis Suarez.

So ahead of this weekend’s game, which will see Chelsea look to end Liverpool’s perfect start to the season at Stamford Bridge, live on Sky Sports Premier League from 4pm; Kick-off 4.30pm, here’s some of the best bits from years gone by…

That’s the first one I played in. I was in midfield with Paul Ince, and Patrik Berger definitely got two, he might have got three. Paul Ince always thought he was the attacking midfielder, I was the holder.

What I do remember is someone got sent off for Chelsea early on, and Ruud Gullit was the manager, but a sub as well. He didn’t warm up, just got undressed and went on, played in midfield and he was unbelievable.

The last game of the season, whoever won got in the Champions League, basically. We were both fighting to get into it. I think that game possibly saved Chelsea from going, not bust but Abramovich came in later. Speaking to John Terry and Frank Lampard, they were told before the game if we don’t win this game, this club’s going to be in real trouble.

This was the first game after Abramovich came in that summer. It was the first time they’d won at Anfield for years. I remember being at the side, and I could see Steve Finnan getting warmed up, and I’d had a pretty good game. I looked at Phil Thompson and said, ‘He’s not bringing me off, is he?’ And he said, ‘You don’t want to come off?’ So he put me to centre-back and took another player off instead.

That was the cup final in Cardiff. The big thing about that was that Chelsea were trying to buy Steven Gerrard at the time, it was the first trophy for (Jose) Mourinho, Gerrard considered going, Chelsea looked unstoppable.

I think Mourinho, at that time, was the best manager in the world, everyone wanted to play for him. We got to the bottom of it, don’t worry about that, Jose thinking he could come to Liverpool and take our man, no chance.

The ghost goal, as Jose calls it. The second leg of the Champions League semi-final, the greatest game I’ve been involved in at Anfield in terms of atmosphere. It’ll be remembered more than most – Mourinho still talks about it! It was a goal because the referee gave it. It’s Jose’s ghost, not ours. People forget the referee let it go and gave the goal, otherwise he would’ve sent Petr Cech off and given us a penalty. We got battered second half, hung on and we all know what happened after that.

I had some of my best games against Didier Drogba, he very rarely scored against Liverpool. But this was one of the games where he did – we played Chelsea about 20 times, I think he scored about three goals. He was one of the best Premier League strikers in history, but his goal in this game was one, where as a defender, you just say what could I do?

We went there in another Champions League semi-final and I think Frank Lampard’s mother had passed away a few days before. He took a huge penalty in the game.

I think we gave them a big scare, and were 2-0 up at half-time. It was just so different to what had gone on before, and probably about time Chelsea won a semi-final against us.

We didn’t want to stop Torres signing for Chelsea. His time was done – £50m was more than enough, we couldn’t believe it. I was shocked by the money they paid. I knew he’d wanted to go from the summer, he hadn’t had a great 18 months, he went in the January, but his one good game that season was against Chelsea at Anfield when we beat them 2-0 and he scored both.

We knew he wasn’t the Torres when he’d first arrived. I thought it was a mistake by Carlo Ancelotti to play him in that game. He’d just signed, it’s against Liverpool. It’s a big game, I didn’t feel sorry for him but to go in against your old club, getting a lot of stick, I think it affected him for his whole time at Chelsea.

I think Suarez scored late on, I wasn’t aware of any of this but got back into the dressing room and then word comes in that Luis has bit (Branislav) Ivanovic. Someone asked him and he denied it. I think on that, that it cost Liverpool the league the next season.

Suarez was banned for five or six games. Liverpool lost the league, I think, on goal difference. Suarez was the best player by a mile in the league, he scored almost every game. In the first four games he missed, Liverpool lost 1-0 to Southampton and drew at Swansea. They dropped five points.

If Suarez is playing, they probably win both of them, but let’s be conservative, you beat Southampton at home – you don’t realise at the time, looking back now, and the season he had the next year, player of the year, football writers’ player of the year, I think if he’d been playing in those games it would’ve been different.