She was the Love Actually child star who got the school nativity audience on its feet with her impressive rendition of Mariah Carey’s All I Want For Christmas Is You, as Hugh Grant’s prime minister snogged Martine McCutcheon backstage. 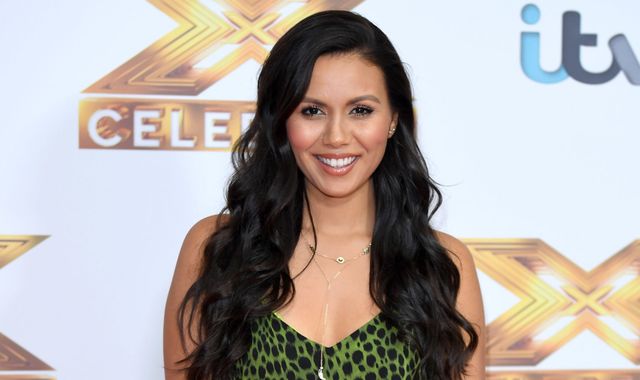 It’s among the memorable scenes in one of Britain’s most beloved rom-coms – so even 16 years after the film’s release it seems inevitable that X Factor: Celebrity contestant Olivia Olson might hear calls to sing the festive number on the show.

Now 27, the singer is taking part in the new and rebooted UK version of the series, alongside other famous faces including Ricki Lake, Martin Bashir, Hayley Hasselhoff and a group of Love Islanders.

But if she makes it through to the later shows nearer to December, anyone hoping to hear her belt out the famous Carey Christmas song she became known for might be disappointed.

Speaking to Sky News at the show’s red carpet launch ahead of the first show on Saturday, Olson said: “You know what, I don’t know if she allows people to sing that song anymore.

“I went to Love Actually the musical in LA when they had it and I was so bummed because they didn’t sing the song. The whole time I was waiting to see the little girl who was going to do it.”

Olson said she was told afterwards that the show had been told, “You can’t use the song”.

Is Mariah not a Love Actually fan? It can’t be. She loves Christmas, after all.

Sky News has contacted representatives of the singer to find out.

Meanwhile, Olson, who released a solo album last year, says she did some filming for X Factor: Celebrity at one of the “iconic” Love Actually locations, and says she is aware of how big a hit the rom-com still is in the UK.

“The people who live there were saying tourists come by every single day and knock on the door to try and take pictures of their house. It’s crazy.”

NHS to cut single-use plastics in canteens and catering