Bruce Springsteen’s son has been sworn in as a firefighter in New Jersey, an achievement proudly witnessed by his famous parents. 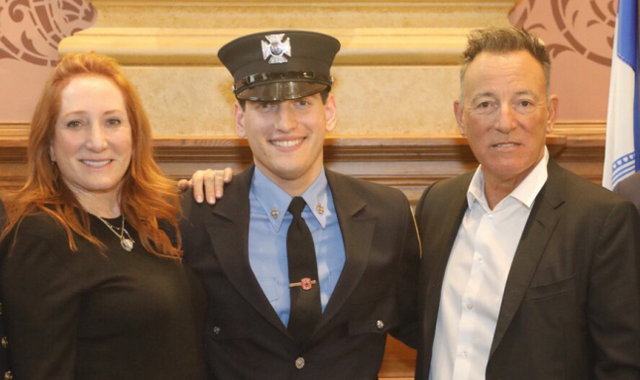 Sam Springsteen, 25, joined the Jersey City Fire Department on Tuesday, along with 15 others.

The new recruit’s parents sat in the front row at the City Hall ceremony.

Legendary rocker Bruce Springsteen – known for hits like Born In The USA, Dancing In The Dark and I’m On Fire – told reporters at the event that he and his wife, Patti Scialfa, were “just excited for him today”.

Jersey City officials said it was the fire department’s tenth class since the US city’s mayor, Steven Fulop, took office seven years ago, taking its membership to the record number of 666.

Mr Fulop was among the city officials seen sitting in the crowd.

He tweeted that The Boss and Scialfa also attended, adding, “They’re such nice ppl [sic]. We got to spend some time in my office talking about music but more than that they’re proud parents of a new JC Firefighter. Congrats to all the new FF joining the best FD anywhere.”

Scialfa first publicly announced her son was training to become a firefighter last August, in a congratulations message posted on Instagram.

In the post, she noted her son’s “brave heart”, told him to “stay safe” and wrote that he had followed his dreams.

He has won 20 Grammy Awards, two Golden Globes, an Academy Award, a Tony Award (for Springsteen on Broadway) and was inducted into both the Songwriters Hall of Fame and the Rock And Roll Hall Of Fame in 1999.

Scialfa is well known as a backing vocalist for Springsteen’s E Street Band, and has also released her own albums.