A taxi union boss accused of assaulting two police officers by using a megaphone close to their ears has been cleared. 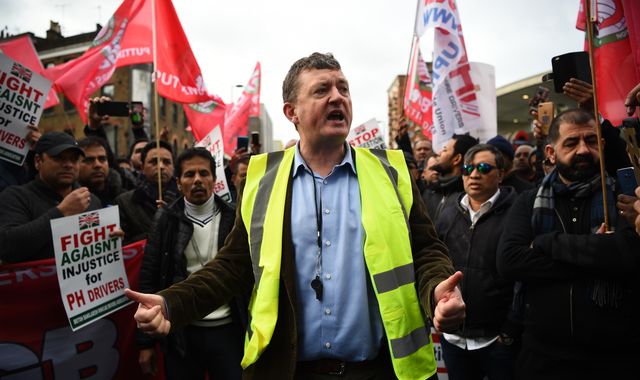 James Farrar was participating in a protest in Parliament Square last March against plans to make Uber and minicab drivers pay the congestion charge despite exempting traditional black cabs.

He faced two counts of assault after it was claimed he operated a loudhailer near Constable Ann Spinks and Sergeant James Lewis during the protest.

But, part way through the trial, Judge Philip Bartle QC told the jury at Southwark Crown Court to find the defendant not guilty.

Dismissing jurors at the end of the prosecution case on Thursday, Judge Bartle said he accepted evidence that each officer “suffered immediate pain and injury to their ears.”

But he added that “the facts did not justify the offence in either case of assault by beating because the offence requires unlawful application of force”.

Using the megaphone “was something he needed to use in order to communicate what he wanted to say to the crowd,” Judge Bartle said.

The defence, led by Icah Peart QC, had argued it would be “violence to the English language” to say that using a megaphone was an application of force.

“What he was doing to address the protesters was, given the circumstances, entirely appropriate,” Mr Peart said.

Both Metropolitan Police officers had pre-existing conditions and neither suffered lasting hearing loss as a result, the court was told.

Mr Farrar, the head of the United Private Hire Drivers’ branch of the Independent Workers Union of Great Britain (IWGB), is now considering a civil case against the Metropolitan Police for a malicious prosecution, describing it as a “corrupt and crude attempt”.

He told PA the prosecution arose less than two days after he submitted a second complaint to the Independent Office for Police Conduct (IOPC) about how the demonstration had been policed.

“Within 48 hours of me escalating the complaint, there were charges,” he claimed.