Arsenal stars Mesut Ozil and Sead Kolasinac have been caught up in a gangland turf war after they were targeted in a robbery, a gang expert has said. 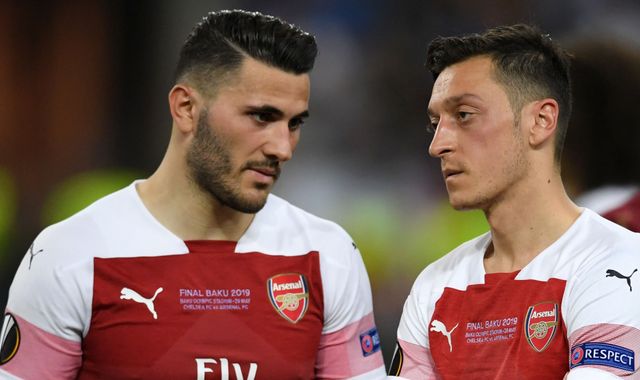 The players were targeted last month as Ozil drove his black Mercedes in north London.

His car was boxed in by two attackers on a moped wearing helmets and brandishing knives.

The players were unhurt during the attack in Golders Green, north London, on 25 July.

The attack, which was filmed on a mobile phone, shows Kolasinac fighting back against the muggers.

But his bravery may have unwittingly placed the two footballers at the centre of a gangland turf war with criminals threatening to “rob everything” the pair have.

The attack has put the security of highly paid footballers in the spotlight.

He said: “These two footballers have found themselves caught up between two gangs of criminals.

“I believe one of them is old school, Turkish, who’ve been in north London for many, many years and the others are eastern European who’ve swooped into Britain in the last 10 years, and they’re basically… it’s a turf war in a sense and the footballers have become their territory.

“And this is a classic example of what’s been happening elsewhere in Britain in the last 10 years.

However, Mr Clarkson said he did not think the Arsenal stars should have police protection.

“I don’t necessarily accept the criticism of the police that seems to be saying that they should be offering full-time protection to these players. Number one, and some won’t like me saying this, they’re very rich so really and honestly the cost of security for a month or two is really such a small amount of more to them.

“But more importantly, there is a feeling they allowed themselves to be manipulated to a certain degree and this is the result of that.

“Obviously the original mugging was nothing to do with that…that was a random crime in which one of the footballers hit back and sort of humiliated the gang involved.

“That then brought in the old school gang to add the ‘protection’ and here we are with a really classic situation.

“In some ways it’s no different to the Krays ‘protecting’ celebrities 50 years ago – even when they’re not wanted. And that’s the key. These characters won’t just go away.”

Although Ozil and Kolasinac’s situation is unusual, the threat to highly paid Premier League stars is very real.

Security for footballers is a burgeoning industry as players are now buying specially trained dogs costing between £30,000 and £100,000 to keep them safe.

Manchester United star Paul Pogba is just one who has bought a family protection dog.

Richard Douglas, director of Chaperone K9, a company that trains and supplies such dogs says the number of footballers buying them has increased.

He said: “Twenty or 30 years ago this was not the case. But now it is a lot easier to see the lives of players through social media. Players have got much more than they did – bigger homes, sports cars etc and people can be quite jealous of this.”

Footballers have been targeted by criminals before – Steven Gerrard’s wife Alex, as well as the couple’s children, were threatened by a gang in their home in Formby, Merseyside, in 2010.

Wayne Rooney’s house in Prestbury, Cheshire, was broken into while he was playing in his own testimonial in August 2016.

But Mr Clarkson said the situation had now become much more ugly because of the involvement of gangs. For Mesut Ozil and Sead Kolasinac there may be no quick fix.

“What really has to happen for them to feel safe again is for these gangs to walk away and leave them alone – the irony is that then one of them has to win – at the moment I can’t see any change in this.

“But these guys don’t play by the rules of engagement.”

The One With Jail Time: Friends actor lookalike sentenced for theft