Solheim Cup: Suzann Pettersen has no fears over form at Gleneagles

Suzann Pettersen has insisted she will justify the controversial decision to award her a captain’s pick for this week’s Solheim Cup. 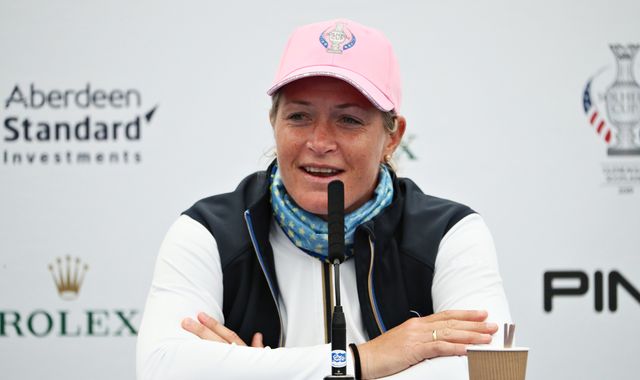 Pettersen was the surprise name among Catriona Matthew’s four wildcard selections for the contest at Gleneagles, with the Norwegian veteran having played only two competitive tournaments in almost two years while taking a break from the game due to the birth of her first child.

But the 38-year-old, who was initially named as one of Matthew’s vice-captains, declared her game was in “great shape” as she prepares to make her ninth appearance in the Solheim Cup.

“When this potential pick came up, I was very honest with the entire captain’s crew,” said Pettersen, who is battling a throat infection. “It was a little bit hard because I was kind of a part of it as well, being a vice-captain.

“But I feel like I’ve been very honest about where I felt my game was at at the time and if it was going to be good enough on a stage like this.

“But I feel honoured to have been picked and I haven’t really thought much more about it. My golf game is in great shape, and being here it feels like I never left the game, which is kind of nice.

“I don’t know if it’s the atmosphere, the energy or everything that Solheim is all about that always kind of brings out the best of all of us. The team atmosphere has been the best, I think, I’ve ever been a part of.

“It’s fun to be around all these new youngsters who are so energetic and really good golfers. It’s fun to see. And it’s a lot better playing than being a vice-captain, a lot less nerve-racking being in control inside the ropes.”

Pettersen also played down the significance of the American team containing six rookies and was adamant that Europe would not be taking the opposition lightly despite their inexperience.

“I don’t think they are rookies on these two teams, they’re all great golfers,” she added. “They’ve all kind of proved they belong on each team.

“I do remember myself being a rookie back in 2002. It was nerve-racking, yes, but that’s a part of the game. But skills-wise, I mean, they’re as good as anyone else. I just think the rookie tag kind of gets overused a little bit.”

Water supply failures up as consumer use increases