Lewis Hamilton has given Sky Sports his strongest indication yet that he is set to stay at Mercedes beyond 2020, after admitting that he doesn’t expect much movement between the top teams in the driver market. 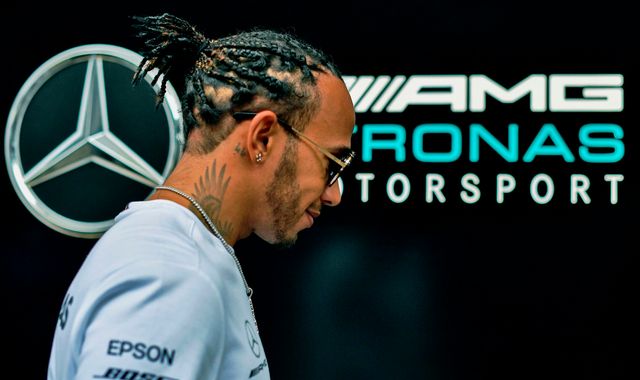 Hamilton, F1’s six-time world champion and premier act, sees his contract expire at the end of this season and Ferrari have been strongly linked with a blockbuster move for the Englishman.

But after driving his new-for-2020 W11 car for the first time at Silverstone on Friday, Hamilton told Sky Sports News’ Craig Slater that fans should “get used to” the current line-ups come 2021.

“In the top teams there isn’t going to be a lot of movement, most likely,” said Hamilton, who held informal talks with Ferrari last year.

“In the ones cascading down I’m not too sure what everyone’s contracts are – but I don’t think there’s going to be a huge amount of movement.

“I think just get used to what’s similar at the moment. I don’t know what Seb [Vettel]’s plan is for the future, but…”

Ferrari have this week given their backing to the out-of-contract Vettel over 2021, while Mercedes are about to start negotiations with Hamilton about his future.

“It’s always an exciting moment,” commented Hamilton, who joined Mercedes in 2013 and has won five titles since, about contract talks. “It’s a real privilege to be wanted to stay and be part of a great team.

“That’s a great feeling. I hope I can continue to contribute.”

Hamilton and Mercedes have enjoyed a great relationship since his arrival, both on-track and off of it – with the Silver Arrows giving their star driver plenty of freedom when it comes to non-F1 activities.

When asked whether he would get that sort of luxury – such as riding bikes with MotoGP star Valentino Rossi – at another team, Hamilton retorted: “I would. Because that’s what I’d demand!”

“It’s not about freedom, it’s about being able to be yourself,” he added. “People say, ‘you wouldn’t be able to get the freedom here and there’, but I wouldn’t go anywhere where I would be able to be myself.

“When I joined this team, Mercedes embraced that and Toto [Wolff, team boss] could see this is the way I am.

“We have the biggest sponsors, we’ve been winning the most championships and we’ve won the most races. I don’t think there’s a single bad thing about it.”

Hamilton: I do my talking on the track

When unveiling the new W11 on Friday morning, Hamilton hit back at recent comments from his younger rivals, and particularly Max Verstappen – who stated that the F1 champion was “good, but not god”.

“Often I tend to see that [talk] as a sign of weakness,” said Hamilton.

And he reinforced that view when speaking exclusively to Sky Sports News later in the day.

“All the best to them,” he continued. “I wish them all the best and I look forward to the races with them.

“Generally I just do all my talking on the track… I don’t need to do all the talking they’re doing.”