Freddie Ljungberg admits he needs to prepare his Arsenal players for the potential of a negative atmosphere when Manchester City visit the Emirates. 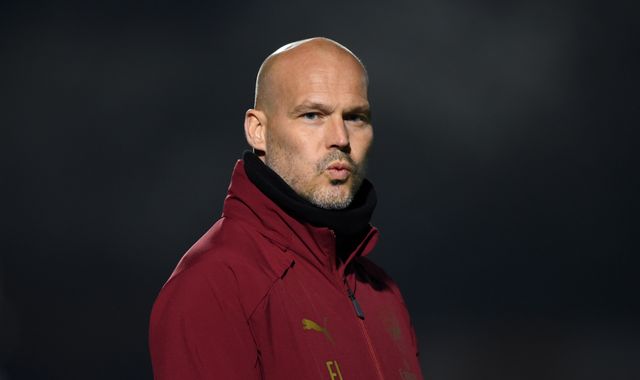 The 42-year-old took over as interim head coach when the Gunners sacked Unai Emery last month but slipped to defeat to Brighton in his only home game in charge so far.

Arsenal were jeered off at half-time and full time during the loss to the Seagulls, who thoroughly deserved to leave north London with three points.

Brighton captain Lewis Dunk said after that game the visitors were keen to start well and turn the Arsenal fans against their own players, following on from the disgruntled response in the final games under Emery’s tenure.

Now Ljungberg, who oversaw a first win in nine games when Arsenal won at West Ham last time out in the Premier League, feels he has to address his squad about dealing with any supporter angst when facing reigning champions Manchester City.

“Of course, I want them to be with us and I know how much it means to the players and I can see sometimes when it happens (bad atmosphere) they can go a little bit down.

“But that’s something I will talk to them about. They already know about it but I will try to prepare them for if and when [it] happens.

“But I think when we play City at home, the fans know it will be a very tough game and will be with us regardless.

“I want to make sure I respect the decisions and voice of the fans. In my opinion they are the club – and we try to do the best we can for them.

“We try to respect them and make them know we are doing this. I hope they have seen that in the last fortnight.”

The victory at West Ham is Ljungberg’s only success in his opening four games in temporary charge and it remains to be seen if he will given the position on a more long-term basis or whether the Arsenal hierarchy will look elsewhere.

The former Arsenal midfielder has called for more time to implement his ideas as the games start to come thick and fast during the festive period.

“It’s an incredible honour,” he added. “The club wants me to do this and I’ve been preparing for this for five years.

“I did the second team here because I knew I’d want to be the boss somewhere. Of course, I pinch myself. I try not to think about it too much.

“You can’t do anything overnight. I try to impact things on the grass but that’s not so easy when like today I have only six players to work with.

“So we don’t have much time to train but we use videos and try to develop that way.

“I am a fan, too, and I want Arsenal back winning trophies but as I say this won’t happen over night. Of course, there are things to fix now and that we can do better.

“I have a list of about 10 to 15 things we need to urgently get right. But you can’t do all those things at once.”

Arsenal have confirmed that Kieran Tierney will miss three months having undergone surgery on a dislocated shoulder suffered at West Ham.

Ljungberg will also be without Hector Bellerin for the game against City as he is sidelined with a hamstring injury.

He will, however, be able to call on club-record signing Nicolas Pepe – who missed the Europa League draw at Standard Liege on Thursday night with a bruised knee.

Wilder vs Fury 2: Tyson Fury could be more than three stone heavier than Deontay Wilder… who will that favour?