England vs Australia: Day two of fifth Ashes Test in a nutshell 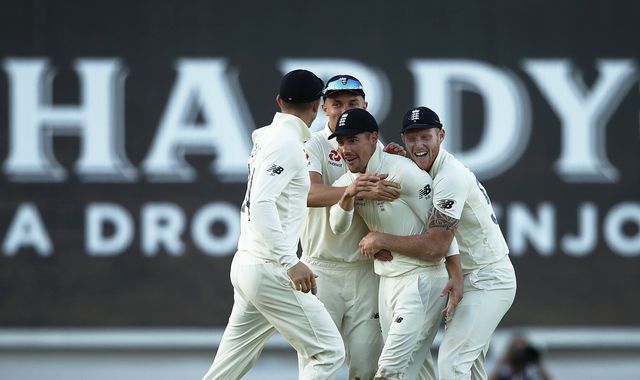 Steve Smith missed out on a fourth hundred of the Ashes series as Jofra Archer’s six wickets helped England skittle Australia for 225 and take charge of the fifth Test on day two at The Oval.

Smith (80) notched his 10th fifty-plus score in a row in Ashes cricket but was unable to complete his 27th Test hundred when, having been dropped on 66 by Joe Root off Sam Curran, he was trapped lbw by Chris Woakes.

Archer (6-62) removed four of Australia’s top six and then ousted Nathan Lyon (25) and Peter Siddle (18) after a pesky ninth-wicket stand of 37 – Siddle out to a superb one-handed catch at gully from Rory Burns – as he claimed his second six-wicket haul of the series.

The impressive Curran (3-46), meanwhile, was at one point on a hat-trick on his home ground as the tourists – save for one man – stuttered in reply to England’s 294 all out to trail by 69 on first innings.

Stats of the Day

Moment of the Day

Jofra Archer’s knuckle ball to dismiss Nathan Lyon was a delivery of beauty. Executed perfectly, it not only pegged back off-stump but halted a dangerous partnership with Peter Siddle in its tracks. It also earned Archer his second five-for in Tests.

But the moment of the day was still to come – Rory Burns diving to his left in the gully to grab a sharp, low catch one-handed after Siddle ran Archer towards third man straight off the face. The opener stretched superbly while diving to pouch the ball in magnificent fashion before celebrating with some classic Surrey swagger.

Did England get their field wrong to Smith? ‘The new Don’ looked so at ease at times during his innings of 80 that naturally the focus fell on Joe Root’s tactics.

To be fair, most of the plans deployed against Smith in this series have come up short – in the case of Stuart Broad bowling from well behind the stumps, quite literally!

But with Smith already past fifty, England persisted to try to hide the ball outside off while still having a fine leg and deep square in place.

That enabled Smith to pick off runs as easy as you like through a huge off-side gap at point, or drop the ball leg-side and canter through.

By switching fine leg to deep point and moving from a 5-4 field to a 6-3 one, England’s chances of drying Smith up increased substantially and towards the end of his innings his frustration was clear to see.

Tweets of the Day

England’s Sam Curran: “As a group of bowlers I think we are pretty good. The wicket is pretty flat. To bowl them out for what we did was a great effort and hopefully the sun will be shining tomorrow and we can get some runs on the board. I’ve been working on trying to swing the ball more consistently back into the right-handers and luckily a few did today.”

Sir Andrew Strauss on Curran: “I really like what I saw. He brings a different dimension to the bowling attack with that different angle. He brings the stumps into play a lot by bowling full. That means he’s going to go for a few runs so you have to accept that, but he has that bubbly excitement about him. He wants to be part of the game and is a very, very talented cricketer and I think we’re going to see a lot more of him over the years.”

Nasser Hussain on England’s selection: “Will Joe Root and the new coach be happy that Jos Buttler ends up a cricketer who bats with the tail or does Jos see a better cricketer in there batting at five? At the moment he strikes me as someone who is pretty good with the tail and his technique would be a little bit vulnerable earlier on.”

Kevin Roberts, CEO of Cricket Australia: “I’m not sure there is anyone in Australian cricket who could have led this turnaround [since sandpaper-gate] as well as Tim Paine has. Ironically, having four years out of the game with a smashed finger gave him the life experience that he is now using to lead our national team.”

Watch day three of the fifth Ashes Test live on Sky Sports The Ashes and Sky Sports Main Event from 10.30am on Saturday.

You can also follow over-by-over commentary and in-play clips on our rolling blog on skysports.com and the Sky Sports app.