Deontay Wilder on Tyson Fury rematch: ‘Look at the route I’m taking – what more do I have to prove?’

Deontay Wilder has claimed “I have bet on myself” by embracing the risk of a second fight against Tyson Fury. 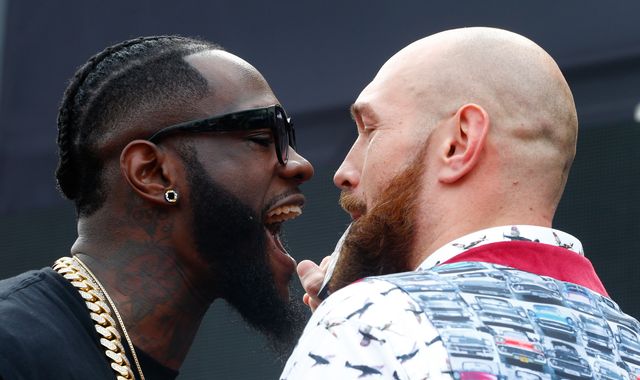 WBC heavyweight champion Wilder insists his willingness to accept rematches with Luis Ortiz then Fury is an unrivalled attempt to “obtain glory”.

Wilder will face Ortiz on November 23 and, when asked if an expected meeting with Fury next year would actually happen, he exclusively told Sky Sports: “Yes, most definitely. I’m ready to go. Another rematch.

“Look at the route I’m taking. What more do I have to prove? Who else has taken the route that I am taking?

“I didn’t have to fight him again. I’m not obliged to fight him. I’m the champion – I do what I want to do.

“I have bet on myself. I move how I want to move. I run my operation.

“It will go Ortiz, then Fury, then a unification – one champion, one face, one name. How amazing would that be?

Wilder and Fury drew their WBC title fight last year, but the planned date for a second fight in February 2020 has been doubted because Fury sustained a major cut in last month’s win over Otto Wallin.

Wilder had previously claimed that Fury benefitted from a slow count from the referee when he recovered from a 12th-round knock-down in their first fight.

“I knocked that fool out. He got blessed by the referee. He had favouritism,” Wilder said.

Wilder continued: “It is amazing to be in the heavyweight division with so much excitement because, when I was coming up, there wasn’t so much. We were in pursuit of getting to this point so it is an overwhelming feeling.

“You’re not looking at an Olympic sensation that popped up out of nowhere. After I medalled for my country I went back to club shows, I had to work my way back up. I appreciate the journey, it allowed me to become who I am.”

Promoter Eddie Hearn believes Wilder and Fury will not commit to a rematch until seeing the result of Andy Ruiz Jr’s defence of the IBF, WBA and WBO titles against Anthony Joshua on December 7, live on Sky Sports Box Office.

Hearn said: “If Ruiz beats Joshua, they’ll be looking to make an undisputed fight [against Wilder], but obviously if Joshua wins, that throws everything out.”

Wilder has warned that Joshua’s shock defeat will be repeated. He said: “I’m one of the people [Joshua] has to prove wrong.

“I understand body language, I am very smart when it comes to [these things]. What his body said in that ring showed me everything that I need to see. Only the fighter would know within himself.

“The secret is still to be told. And that’s OK, because you want to keep people guessing. Was it this? Or was it that? That’s why the second fight is bigger. People don’t know what to think.

“People will finally see what it really was.

“If he’s not right, and people are saying one thing but he does another, then people will have their own perception of what they think about him afterwards.

“There is more pressure on him. When I talk about his situation I feel drained.

(c) Sky Sports 2019: Deontay Wilder on Tyson Fury rematch: ‘Look at the route I’m taking – what more do I have to prove?’