The Green Bay Packers edged out the Carolina Panthers 24-16 at a snowy Lambeau Field, riding running back Aaron Jones for three touchdowns in the contest. 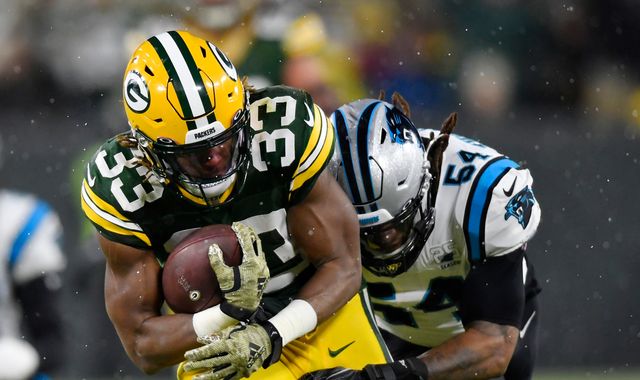 Jones and fellow Green Bay back Jamaal Williams combined for 156 rushing yards, with the former finding the endzone three times.

On their final possession, Carolina drove into scoring position with an 18-play, 88-yard drive but, on second-and-goal from the two-yard line with four seconds left, Christian McCaffrey was stopped just short of the goal line.

McCaffrey, who entered the game leading the NFL in rushing yards per game, scrimmage yards, rushing touchdowns and total touchdowns, rushed 20 times for 108 yards and had six catches for 33 yards but he never hurt the Packers with a game-changing play.

Carolina quarterback Kyle Allen threw for 307 yards and D.J. Moore had nine catches for 120 yards, but it wasn’t to be enough for the visitors.

Allen found Curtis Samuel for a two-yard score on their second possession to open up a 7-0 lead, before Jones tied the game up after his first TD, a five-yarder.

Jones’ second score, from down at the goal line, was set up by a fumbled snap by Allen, putting the Packers in front 14-10 after Joey Slye had nailed a 50-yard field goal to nose the Panthers back in front.

Jones’ third touchdown, a 13-yarder to open the third quarter, made it 21-10. That capped a defining sequence of the game.

A defensive penalty had given Green Bay a first-and-goal at the one-yard line with two seconds left in the first half. Green Bay coach Matt LaFleur decided to go for the touchdown rather than the field goal but defensive tackle Gerald McCoy – who earlier was called for a harsh roughing the passer penalty that extended the drive – blasted Williams in the backfield.

Green Bay got the ball to start the second half and immediately faced a second-and-26. With momentum about to swing in the Panthers’ direction, Aaron Rodgers hit a wide-open Davante Adams for a gain of 38. Green Bay got seven receptions for 118 yards from Adams.

A 28-yard run by Jones then set up for his third touchdown and 14th of the season, allowing him to briefly pass McCaffrey for the NFL lead.

McCaffrey tied Jones for the touchdown lead with a three-yard run early in the fourth quarter. Panthers coach Ron Rivera went for the two-point conversion but safety Adrian Amos broke up Allen’s pass to tight end Greg Olsen, leaving the Panthers down 24-16.

While the Packers couldn’t put up any further points, Carolina couldn’t get back in the endzone as they drove down the field late in the game.

The Packers are on a bye in Week 11, before they then take a trip to San Francisco for a game against the currently unbeaten 49ers that could prove decisive in the race for home-field advantage in the NFC playoffs.

The Panthers host the Falcons in a NFC South divisional clash, with Atlanta coming off a shock 26-9 road win over the Saints. Atlanta had only won one game going into New Orleans, who had only lost one.