Struggling UK museums could be heading for a ‘cultural bonfire’

The UK “is looking at an absolute cultural bonfire”, according to the boss of the world-renowned Mary Rose collection. 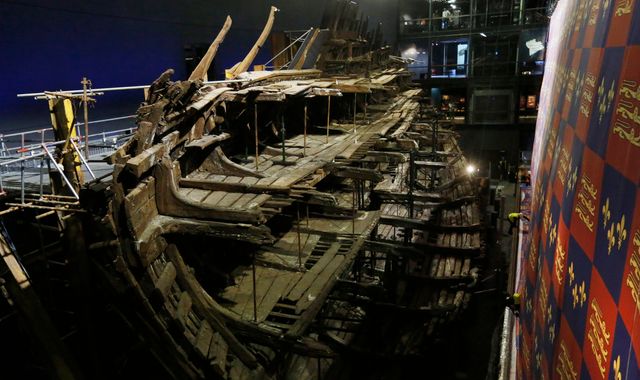 Speaking to Sky News, Helen Bonser Wilton said the museum was “in mortal peril and would not survive past the summer” if it did not receive support.

And she warned the museum is not alone in its struggle following the coronavirus pandemic.

The Mary Rose Collection is home to Henry VIII’s legendary flagship which was excavated and raised in the 1980s along with 19,000 artefacts found on board.

The charity receives no government or public funding and 90% of its income comes from visitor revenue.

It costs over £2m to preserve the collection, and Ms Bonser Wilton says those costs continue regardless of whether the museum is open.

“Since we’ll be closed for the main season, we’ve basically lost our income for the entire year and while you might think we save costs by closing and you’d be right to an extent – the great majority of our costs continue.

“So, we have a standard cost of £2.2m every year which is basically to look after the collection and to make sure it’s in the right environmental conditions.”

The collection was under the sea for 437 years and as a result is very fragile, so the ship and its artefacts need to be kept at a very specific temperature and humidity to ensure it doesn’t deteriorate. This involves a team of specialist staff, and equipment as well as “eye watering utility bills”.

Ms Bonser Wilton warned the sector needs urgent help, not least because it attracts millions of visitors from around the world, contributing significantly to the economy.

“We are proud of our history and our culture, it’s one of the primary reasons people come to the UK as tourists and we know that tourism is the third largest industry in the whole of the British economy and if we can’t protect things like this… I think we’re going to be in enormous trouble.”

Alistair Brown, from the Museums Association, told Sky News there are around 3,000 museums in the country and all of them from the largest to the very smallest have been affected by COVID-19, “none have been untouched” and some he warned will permanently close.

He said independent museums like the Mary Rose Collection were most at risk because their income was reliant on trading, on their cafes, their shops as well as any ticket income they may charge.

Brown also cited a worrying survey from the Association of Leading Visitor Attractions which inferred there would be challenges for the sector even when reopening was possible.

It found 29% of the public don’t intend to return to museums “for a long time after reopening”, with a further 54% saying that they “will put off visiting for a while” after reopening.

The Art Fund found that 98% of museums have cancelled or postponed exhibitions and say the 427 museums it surveyed are worried about reopening, and how to reconcile social distancing measures with selling enough tickets to balance the books.

“There is a very delicate funding structure in place in most museums,” Sarah Philp, director of programmes and policy at the Art Fund told Sky News, admitting many won’t be able to afford to reopen.

“Our concern would be museums… would be looking to make a lot of money quickly which would mean selling the most significant and valuable works of art which would be hugely impoverishing to our nations cultural heritage, and mean the general public miss out on the wonderful things we can see in museums,” explained Ms Philp.

Concerns that some museums and galleries could be forced to sell off works have also been met with alarm by the Art Fund.

Art expert and Master Conservator Simon Gillepsie told Sky News: “Some of the smaller museums are thinking about how they might support themselves and asking if they have a painting that they think they could sell – that’s their main asset”.

And aside from whether museums can afford to open at all, the kinds of exhibitions we see over the next few years are likely to look very different to the previous few, with international lending all but ceased.

Tristram Hunt, director of the V&A, told Sky News that blockbuster exhibitions won’t be viable, in the near future at least.

“The Dior exhibition here at the V&A – that involves large numbers of people coming to see paid for exhibitions and in the near future that business model is going to be under real strain so we’re going to have to think about the finances of museums as to how we have run them over the last five to 10 years,” he explained.

The V&A receives some public funding, but Mr Hunt said they would also have to re-think the way they run the museum in the future as a result of the reduction in funds they were generating.

Prolonged closure, the prospect of very reduced visitor numbers on reopening as well as “a very tightened development market for sponsorship” would all impact on how the museum operates.

Hunt told Sky News they were “facing some really significant challenges” and so wanted to start having conversations with the government “about the sort of support they’re willing to give”.

There is a real possibility “we will see the closure of smaller independent museums, for whom this is an existential threat to their financial viability,” he echoed.

He warned that those wholly dependent on their visitor income were most at risk and their closure would “affect the entire cultural ecology of the country” which was “a real source of concern”.

Mr Hunt also stressed the importance of the sector in inspiring the population as well as the significant amount it contributes to the economy, summing up: “The creative industries put £100m into the economy, it’s a success story and if we want to have tourism… we need great cultural institutions.”

(c) Sky News 2020: Struggling UK museums could be heading for a ‘cultural bonfire’