Little Mix: ‘It took us years to feel confident enough to speak out’

They’re one of the biggest pop bands on the planet, with millions of record sales, number ones, awards and sold-out shows at arenas around the world under their belts. 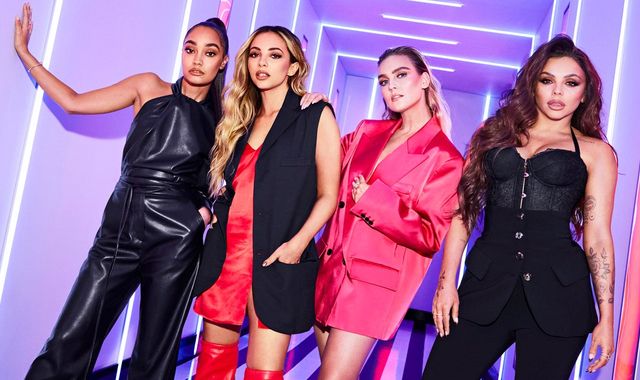 But almost a decade since they shot to fame as the first ever group to win The X Factor, Little Mix say it is only in recent years that they have felt confident to speak out about the darker sides of fame and issues that have affected them during their time under the spotlight.

Earlier this year, both Jade Thirlwall and Leigh-Anne Pinnock opened up about their separate experiences of racism, while Jesy Nelson and Perrie Edwards have spoken out previously about struggles with anxiety and depression.

As they were getting ready to launch Little Mix: The Search – their new show which sees the tables turned and the girls looking to find the next big UK band – Sky News attended a preview event, and asked if their experiences of both the positive and negative sides of fame have put them in a better position than most to support up-and-coming talent.

“Definitely,” they agree, before Thirlwall continues.

“We’ve all been through stuff throughout the years and we all have things that we’re really passionate about,” she says.

“I think, you know, it did genuinely take us years to get to a place where we felt confident enough to talk about those things.

“It’s a shame we did take that long but we were so young when we entered the band and the industry. We were literally turning into women together and faced all these things together.”

In 2018, Little Mix released a powerful image to hit back at bullies and promote body positivity, posing naked and covered in some of the insults that have been thrown at them in the years since they rose to fame.

Thirlwall, now 27, was a teenager when the band was formed.

Earlier this year, she talked about her mixed-race heritage – her maternal grandfather is from Yemen, her maternal grandmother from Egypt, while her father is white – and said she was afraid of talking publicly about it when she first became famous because she feared “not being as popular” as the other girls.

Pinnock, 28, whose parents are both mixed-race, spoke out about racism in the entertainment industry during the Black Lives Matter protests in June – saying she was told during the start of her career she would have to work “10 times harder” as “the black girl” in Little Mix.

In 2019, Edwards, 27, spoke publicly about having suffered anxiety and panic attacks, while Nelson, 29, released a documentary, Odd One Out, about her mental health struggles.

In it, the star revealed she had attempted suicide in 2013 after online abuse over her looks and weight left her unable to “tolerate the pain anymore”.

Thirlwall says their experiences and the confidence that has come with age means they “can really be honest” with the groups hoping to find fame on The Search “about the things that they might go through” should they become famous.

“This time these groups have a support system there who have been there and done it, and can talk them through it and help them, and be a shoulder to cry on or give them advice, which is so essential, I think,” she says.

The star also spoke about the impact of social media.

“I feel like we were at the very dawn of it,” she says. “Twitter was brand new when we first started out and social media is so important now to your success as a musician, which is weird but it’s true.

“So I think we can also be there for them in that sense and talk them through what it takes to grow a thick skin, unfortunately, because everyone… as soon as you step into the limelight, you’re going to be judged, you’re going to have people commenting all the time, having their say. So it’s important for us to make sure that they all feel supported in that.”

The band also spoke about their switch from being judged to judging.

Pinnock said it was “stressful” having people’s “dreams in your hands”, but not as stressful as when they were the ones facing Simon Cowell in 2011.

“Being judged is definitely more stressful,” she says. “I think it is more having their lives in your hands, that is a massive responsibility and you can’t really prepare yourself for that. It’s intense.”

(c) Sky News 2020: Little Mix: ‘It took us years to feel confident enough to speak out’