Ed Sheeran: Made In Suffolk exhibition shows rise from busker to global star

Photographs, artwork and personal items charting Ed Sheeran’s rise from busker to one of the biggest music stars in the world will go on display next week. 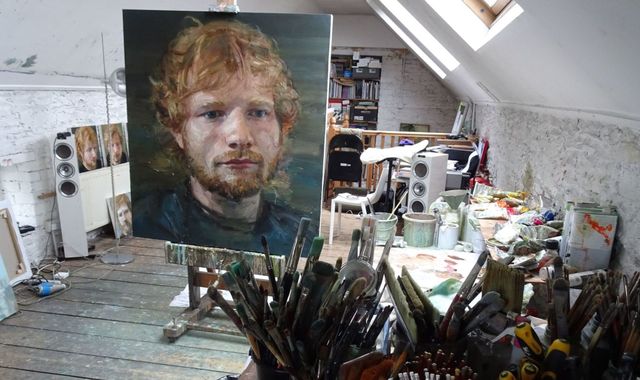 Curated by his father, John, Ed Sheeran: Made In Suffolk provides a window into the singer’s life before and after fame, and is timed to coincide with four homecoming gigs in Ipswich.

It opens to fans on Tuesday, ahead of the first show on Friday.

Photos on display include one of the star when he was 15 at a music festival in a small village near Framlingham, where he grew up, and one where he is sitting on a sofa in his dressing room while on a European tour in 2012, the year after the release of his debut album, + (Plus).

“The choice of Ipswich shows just how important his Suffolk roots are to him. Ed has a deep affection for the landscape and its people.

“This exhibition reflects that – its title is Made in Suffolk, which he was.”

Sheeran is coming to the end of a two-year world tour which has become the highest grossing of all time, and will play the last shows in Ipswich.

Eight years on from the release of his first single, The A Team, the 28-year-old has sold more than 150 million records around the world and now has a total worth of £160m, according to the Sunday Times Rich List.

Ipswich mayor Jan Parry says the exhibition, which will be open for nine months, is a “road map” of his journey to international star.

“Thanks to the curation of Ed’s father John, this is an intimate portrait of a singer-songwriter who revels in his roots and who is proud of both town and county.

“Ed Sheeran has come such a long way from the days of busking in the town and playing in front of a few dozen people in local pubs.”

Meanwhile, three signed bottles of limited edition Ed Sheeran x Heinz Tomato Ketchup, featuring a design paying tribute to the tomato sauce inking on the star’s tattoo sleeve, sold for a total of £3,650 at an auction for charity at Christie’s on Thursday.

The singer has collaborated with Heinz to raise funds for the Rise Against Hunger and East Anglia’s Children’s Hospices (EACH) charities.

The bottle with the highest bid was sold for £1,500, and is believed to be the most expensive bottle of ketchup in the world, according to Heinz.

The Ashes LIVE: Second Test on a knife edge as Oz chase 267